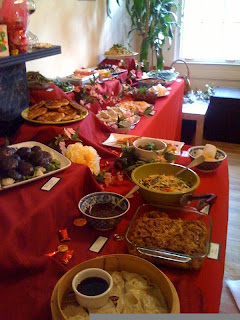 What is better than having a potluck with 30 of New York's greatest food bloggers? Having that potluck be a Chinese New Year Celebration. The food was spectacular and the food centric conversation was even better. Our hosts were the fabulous Jackie Gordon @divathatateny and Ken Leung @hungryrabbitnyc, who not only hosted, but put up fabulous decorations. The video below will give you a sense of the banquet we all enjoyed. You can see that everyone brought their A-game.

My contribution was braised pork shoulder, hoisin BBQ sauce and a cilantro chili slaw. You can probably guess I was going for a Southern spin on Asian cuisine. I was really please with how it turned out. The meat was meltingly juicy and tender and the slaw was the perfect fresh kick it needed. This is the recipe I based the slaw on, but I did up the herb quantity from 1/4 cup to 1/2 cup of both the mint and cilantro and added in 2 deseeded and minced Thai chili pepper. I also added some fish sauce to taste. The hoisin BBQ sauce is based on this recipe at Epicurious. I subbed out shallot for yellow onion and added in 3 tablespoons toasted sesame seeds.

Juicy and Simple Pork Shoulder
for carnitas, enchiladas, stew, Vietnamese buns...
This shredded pork comes out juicy every time. It is a no fail recipe. I don't use lots of spices during the cooking process so that the leftovers are more versatile.


One 6 to 10 1/2 lb pork shoulder, skin-on, bone-in
Season well with salt and pepper
Sprinkle with a teaspoon or so of each seasoning like cumin coriander chili powder cayenne
2 Tablespoons paprika
2-3 tablespoons of soy sauce
3/4 bottle brown ale
a few cloves of garlic, peeled and halved, 6-10

Rub in the seasonings and put pork into an oven safe stockpot.
Add liquids and cover tightly with a lid or tinfoil. Cook 9-12 hours at 250 degrees until it is falling apart. Start checking after the first 8-9 hours. You'll know it's done when the fork slides in easily and the juices slide out. The internal temperature was at around 190 degrees when it was done.

The liquid it's in is delicious(might need some salt), but the meat is occasionally helped by a BBQ sauce, gravy, asian hoisin sauce or enchilada sauce for leftovers.

When the shoulder is done you really can keep it in a 200- 250 degree oven for 4-5 hours. I have recipes that have it cooking for 24 hours. I kept mine in for about 20 hours before we ate.

The skin is the best part!
When it's done, using a knife and tongs peel off the fat and skin layer and put it on a pan to roast in a hot(450 degree) oven. Make sure you salt and pepper it first. Roast about 10 minutes, or longer til some crisp bits are there. So delicious. You could also smear it with some honey before crisping it in the oven.
Posted by Grace Piper at 2:45 PM

My sister recommended this post and she was totally right keep up the fantastic work!
Cooking Equipment

Grace Piper
New York, New York, United States
I produce and host Fearless Cooking, an online food show and blog. iTunes calls me "an awesome mixture of personality and audacity" whether I'm deep frying a roll of paper towels, interviewing Chef Tyler Florence or dissecting a squid. You'll find recipes, foodie news, and interviews with interesting people who work with food. I also speaks at technology conferences about content creation and using new media tools such as Twitter, Flickr, Facebook and Blip.tv to help people eat well. If there's food around, I'll be there with a fork in one hand and a camera in the other. Email me at Grace at FearlessCooking Dot TV Follow me on Twitter Http://twitter.com/gracepiper